Appeal in One Bay Area Lawsuit Filed!
UPDATE:
THE LAWSUIT IS OVER.  WE LOST.  THE APPELLATE COURT SAT ON THE CASE FOR 3 YEARS AND THEN SAID THAT BECAUSE PLAN BAY AREA / ONEBAYAREA CHANGED ITS NAME AND A FEW DETAILS WE WOULD HAVE TO START OVER AGAIN AND REFILE OUR LAWSUIT.  IS THERE JUSTICE IN AMERICA?  NO.  BUT WE HAD TO TRY.

Rosa Koire of The Post Sustainability Institute and Democrats Against U.N. Agenda 21 and Michael Shaw of FreedomAdvocates.org and GlobalizationofCalifornia.com (the “Plaintiffs and Appellants”) filed the Opening Brief in the Appeal in their state court case against the Association of Bay Area Governments (ABAG). The lawsuit seeks the negation of ABAG’s One Bay Area(OBA) $300 billion dollar plan to remake the San Francisco Bay Area. The One Bay Area/Plan Bay Area program is the prototype Agenda 21 restructure of local government to change how Americans are expected to live. For information on ABAG and the OBA Plan, see a List of Resources here.
The necessary funds were raised thanks to many participants who contributed or pledged donations. Those contributions, plus last minute funds from an anonymous major contributor have enabled this litigation to continue. Well done all!
As the battle continues, be forewarned that additional funds will be necessary, as the case will need to proceed beyond the California Appellate Court. Certainly the case will be presented to the State and/or Federal Supreme Court by the losing party, and we must be ready! For information on methods for contributing funds toward the lawsuit, clickhere. You can make a donation now, or pledge to contribute small or large amounts in the future.
As described elsewhere (see List of Resources), ABAG is an extra constitutional layer of government. It is unelected and unaccountable. It is a Council of Governments (COG), a national format designed to “transform” America. ABAG has planned to direct over $300 billion to the One Bay Area/Plan Bay Area ‘smart growth’ program. California will be lost to the world’s ‘new order’ if this lawsuit is not successful. California state's commitment to ABAG’s One Bay Area Plan will lead to:
• the restriction of individual mobility
• the control of and limitations on single family housing
• a gigantic commitment to a high concentration of stack and pack housing
If ABAG gets what it wants, Southern California will be subjected to a similar plan primarily though the COGs 'SCAG' (Southern California Association of Governments) and 'SANDAG' (San Diego Association of Governments). And as California goes, so goes the nation...
HELP STOP One Bay Area/Plan Bay Area!
Read the Appeal Opening Brief here and review the court history of the litigation atGlobalizationofCalifornia.com 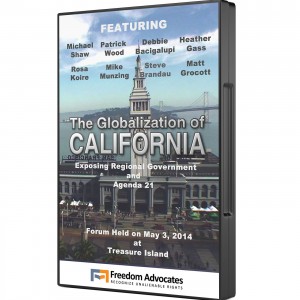 The Post Sustainability Institute / Democrats Against UN Agenda 21 and Freedom Advocates are launching a legal challenge to PLAN BAY AREA/ONE BAY AREA (click for a pdf of the Plan).    This plan is different from other regional plans across the country and we believe that it will be a prototype for your future.

PLAN BAY AREA is an all-encompassing land use and transportation plan that regionalizes all 9 counties and 101 cities of the San Francisco Bay Area by limiting new construction to specific locations (only 4% of the land area) and requiring high density development: more apartments and condos on top of shops.  If cities want federal and state transportation dollars they will have to agree to this Sustainable Communities Strategies plan.  PLAN BAY AREA is an aggressive implementation of UN Agenda 21's "islands of human habitation."
See California's official Wildlands Map

PLAN BAY AREA violates voter-approved urban growth boundary ordinances.  Even though voters all over the Bay Area have voted to determine where their urban growth boundaries should be, PLAN BAY AREA actually nullifies these boundaries by restricting development to very small locations in just some cities. It requires 80% of residential development and 66% of commercial development to squeeze into these small, fully urbanized areas. If you own property, any property whether it’s a house or an office building, outside of the PLAN BAY AREA 4% Priority Development Area you may not be able to add a granny unit, add on to your building, or develop your lot.  PLAN BAY AREA is valid for 25 years!  Radical building restrictions lasting for over a generation will cripple land value and your ability to start and maintain your business or residential plans.   For a pdf of the MAP please click here--orange areas are Priority Development Areas.

The only lawsuit which can block the implementation of Plan Bay Area is one that challenges the PLAN itself. Together, Michael Shaw of Freedom Advocates, and Rosa Koire of the Post Sustainability Institute have spearheaded this fight.

We can do this! Together.  To participate in this historic lawsuit please send your generous check to:

Please put "Lawsuit" on the memo line.  All funds will be used to pay for legal services.

NOT UNDER PLAN BAY AREA


PLAN BAY AREA violates the 5th Amendment of the US Constitution by taking property rights without just compensation.  By the creation of Priority Development Areas, this Plan restricts 80% of residential development and 66% of commercial development to just a few small areas of your city--until the year 2040.  If your property is outside of the PDA (96% of property is outside) you will likely not be able to build or expand your building--and you won't be paid for this loss.

PLAN BAY AREA violates voter-approved Urban Growth Boundary ordinances.  Because the Priority Development Areas are within the UGBs but are much smaller restricted areas they are in violation of ordinances that clearly state that development must be encouraged out to the limits of city services: Urban Growth Boundaries. These ordinances are found throughout the Bay Area and cannot be changed without voter approval.

PLAN BAY AREA permanently strips all development rights from rural properties in the nine county Bay Area.  Plan Bay Area is effectively taking conservation easements on all rural lands without paying for them.

PLAN BAY AREA restricts development rights of property within the Priority Development Areas, too.  Construction will be limited to mixed-use high density Smart Growth development.  Existing buildings are likely to be out of compliance with your city's General Plan (legal non-conforming) and permits to make additions or changes will likely not be granted.

PLAN BAY AREA affects every property owner in the entire nine county 101 city Bay Area.  Only the 1% big developers with their connections to elected and appointed officials will take advantage of tax credits and subsidies.

The Post Sustainability Institute is a 501 c4 non-profit.  Donations are not tax deductible.  All funds will be used for this legal action only.


Through our attorneys it has recently come to light that PLAN BAY AREA will be exempt from CEQA (Environmental Impact Report) requirements because underlying area plans have already been completed in the affected areas known as Priority Development Areas (PDAs). Completion of these underlying area plans along with their accompanying EIRs were a requirement in order for areas to quality as PDAs and to be eligible for the One Bay Area Grant program, OBAG.

Why is this important?  Because an effort is already underway to ask people to donate to a fund challenging the Environmental Impact Report.  Are the MTC and ABAG orchestrating this effort with their own people in order to divert our time and resources to a legal challenge that will have no validity whatsoever?  In fact, PLAN BAY AREA need not complete an EIR. The areas impacted by PLAN BAY AREA have already met these requirements. The EIR being prepared by the MTC and ABAG is only being done to deceive the public and distract them from the real issues of the plan's unconstitutionality.  Don't be fooled into giving money or time to a useless, baseless legal challenge to the EIR.
Ernst Huber, official Nazi Party spokesman, 1933:

'All property is common property.  The owner is bound by the people
and the Reich to the responsible management of his goods.  His legal
position is only justified when he satisfies this responsibility to the
community. '

'The issue of land ownership is secondary; what counts is the issue of control.  Private citizens, therefore, may continue to hold titles to property--so long as the state reserves to itself the unqualified right to regulate the use of their property.'
Leonard Peikoff, The Ominous Parallels, 1982